RSS
← Who Loves Ya Baby Back? Basic Rib Technique and a Holiday Preview
Next Post →

No clever title today, no quips, no sensationalization, “bacon” is all I need to say to set this post up for success!  Now, it is really hard for most people to picture foods like bacon, beef, and butter as health food, but if  you are already a convert then I am preaching to the choir. 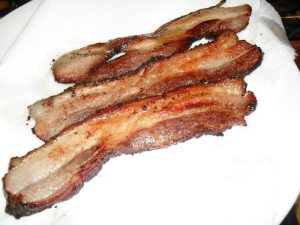 This past weekend was a perfect time to make a big ass slab of bacon because the chilly weather drove us indoors and left me seeking some rich, warm comfort food.  Which last night meant a delicious pork and potato soup with leeks, bacon, and carrots that did not photograph too well. 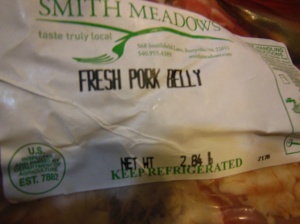 For the bacon you will need

This recipe also takes several days to brine, so it  is best to plan ahead.  First prepare your brine in a disposable foil pan, combine a 2:1 ratio of sweet to salt.  I would say for every pound to use 1/8th cup salt and  ¼ cup syrup or honey.  Vigorously mix your brine with cold water until everything looks fairly dissolved.  It doesn’t have to be perfect you are going to throw this part out anyways.  If your pork has a thick layer of skin on one side you will need to remove that now (home-made pork rinds anyone?)  Throw your pork belly into the brine and fill with more water until it covers the slab of pork completely.  I find that putting a plate on top does a pretty decent job at keeping the pork belly submerged in the brine. 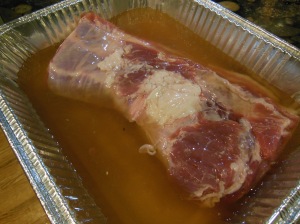 Here is the not so awesome part.  You have to cover that big porky slab of happiness and leave it in the fridge for 48 hours.  If you plan on smoking your bacon on a Saturday it is best to start the brining process on a Wednesday night.  This is a super easy thing to whip up while you are making dinner.  After your 48 hours is up discard the brine, pat you bacon dry, line the foil pan with some paper towels and put it back in the fridge uncovered for 12 hours to cure.  This will be on Friday night if you are using my time frame.  I know it’s the start of the weekend and you want to party, but try to remember to discard your brine some time in between tequila shots.  Saturday morning your bacon will be ready to throw on the smoker.  You want to use a really low temperature here and lots of smoke. We selected a combo of hickory and maple because while the maple compliments the maple flavor in the brine, hickory just has a more intense flavor.  Try to keep the smoker around 200F, but always keep it under 225F. 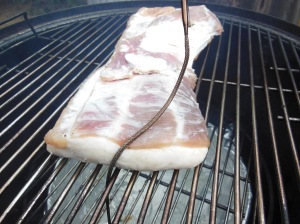 We use a grillable thermometer probe to monitor temperature.

After about 2-3 hours it is typically done, if you are monitoring the temperature, I suggest taking it off at around 150F. 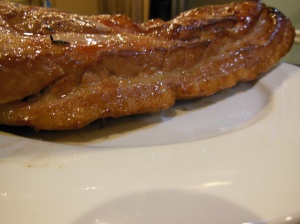 Now, with all of that said, unless you have a deli style meat slicer in your home (if you do I envy you), you will not be able to get those perfect thin slices that you get pre-packaged in your grocery store, but if you buy your bacon that way the terrorists win.  Plus, even if I had a professional meat slicer, I would probably end up missing a finger or two.  Seriously, I cut myself nearly every time I cook, my husband even keeps a tourniquet in the kitchen (mostly as a sarcastic joke though).  I should have titled this paragraph “how to make sure no one ever eats at your house.”  Thick cut bacon is best cooked on a wire rack over a cookie sheet in the oven, or chopped up and added in to recipes.  So far we have been eating it with… 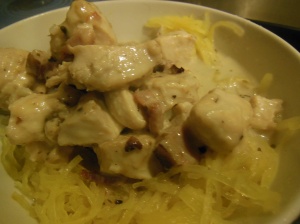 Adapted from the genius mind behind PaleOMG 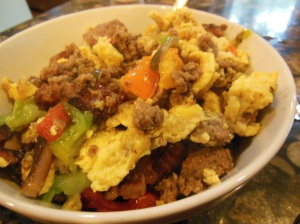 Also in a beefy breakfast scramble 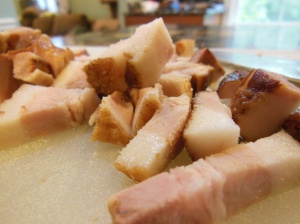 Posted by Primal Smoke on October 9, 2012 in Bacon, Favorites, Pork

← Who Loves Ya Baby Back? Basic Rib Technique and a Holiday Preview
Next Post →