Now, we love the show BBQ pitmasters, but you cannot watch this show without being subjected to the loud mouthed jackass pitmaster known as Myron Mixon.  I personally find him a bit too abrasive, but the hubbs loves him.  Anyway, the show got me thinking, all the people on there have really badass BBQ names, and Derek and Michelle just doesn’t sound quite as cool as Hickory Rick and Shotgun Chelle.  Ok, that was the best I could come up with…maybe they’re not the best pitmaster names, but maybe theyre at least as cool as Paul Diablo, Johnny Trigger, and Tuffy Stone.  I am still working on the names…I need some help.  What do you think? 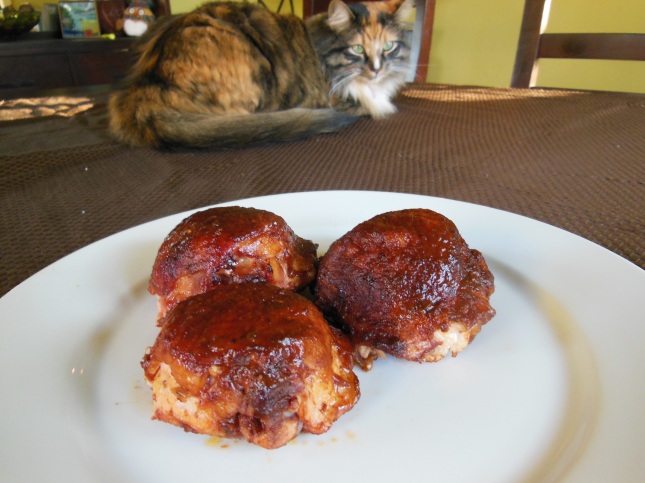 I know its gross that the cat is on the table, you try telling a cat what to do.

So, Myron Mixon does this competition chicken in a cupcake pan, so that the end result is perfectly round and uniform, making for a nice presentation.  So, we got Myron’s top-secret method…which you cannot get from watching the show, you have to shell out 30 bucks for his book of course.  Anyway, we adapted it for Primal Smoke, since we are not too keen on following any recipes that call for 5lbs of sugar and 1 cup of MSG “flavor enhancer.” Seriously, you cannot help but laugh when you read that! 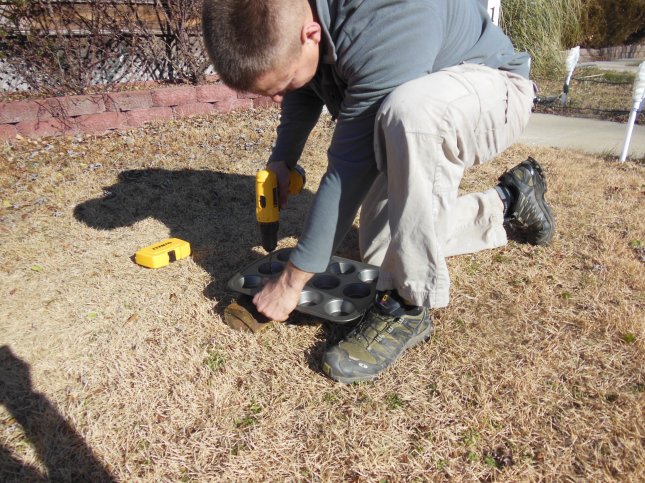 Ok, so the holes help the meat drain, so that it does not get “water-logged,” A collection of liquids in the muffin pan will ruin your perfect, slightly crisp skin that is so sought after when cooking BBQ chicken.  You can start prepping your meat by cutting the knuckle end off of the bone and trimming the bone down until it fits in your pan.  Trim all the big chunks fat off the edges of the chicken, and especially off the edges of the skin.  I know fat is good for us, but too much fat =soggy, rubbery skin.  Sprinkle a little BBQ rub, or just some salt and pepper on both sides of the chicken thigh and place it skin side down in the pan.

Be sure to trim off any excessively large chunks of meat that stick out of each little nest and then throw those babies on your smoker.  We used our stick-burner for this one, which is a large offset box that we burn whole logs of wood in, instead of the usual charcoal-wood chips combo that I use for the bullet.  Put the cupcake pan onto a cookie sheet and pour a layer of chicken stock into the cookie sheet, being very careful not to get it on the meat.

Don’t use your good bone-broth for this, as you are just going to discard it later

Smoke the meat at 275 using a strong wood, we used mesquite which is traditionally not for chicken, but the meat is only in the smoker about as long as the media cared about John Travolta flashing his junk to a hotel masseuse…not very long, so it makes a stronger wood acceptable.  Smoke the chicken for about an hour, or until the internal temp gets to about 140-145, then pull it off, flip the chicken and put it back in the pan skin side up.  Before returning it to the smoker sprinkle the skin with more rub, or salt and pepper, then put it back on the cookie sheet and let it cook for another 30 minutes or so.  Once the internal temp hits 155-160, brush some sauce on top of the chicken and close the lid for another 20-30 minutes.

When they come off the smoker, cover them with some foil and let them rest for about 3 minutes, then glaze again with sauce one more time before serving. Here is a perfect recipe for BBQ sauce, this stuff with make your meat sweet and juicy, like JLo’s backside. 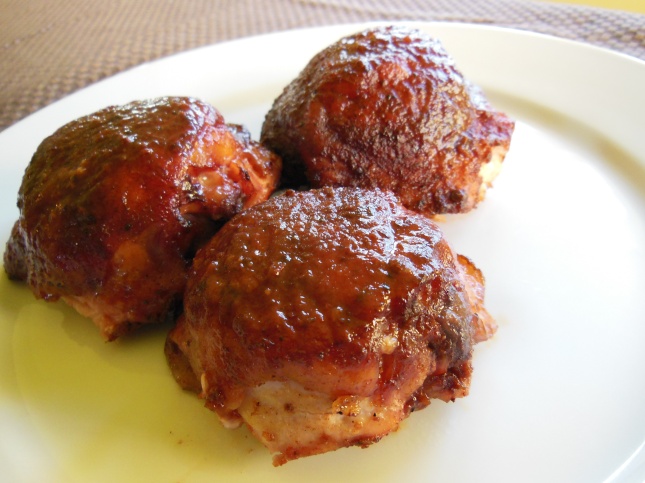 That’s it for this week, we have been Qing up a storm of Whole30/Sugar Detox compatible foods, so check back next week for more smokey goodness.  Shotgun Chelle signing out!

Posted by Primal Smoke on January 4, 2013 in Barbeque, Chicken