How is everyone doing on their New Year Resolutions so far? I honestly can’t wait until the flood of people give up on their “work out every day” resolution and I have some space at the gym again, jeesh.  I wanted to give up coconut butter for new years, but I knew that would last about an hour so I made a few more reasonable goals.

I know what you are thinking, I must be f*cking insane giving up coffee,convenience foods, and all fruit and sweet potatoes at the same time, but I don’t like to do anything half-assed.  I am already into my 2nd book this month, real ones too, not the kind with lots of pretty pictures, and I obviously have to slowly work up to my strength based goals, although I am getting really close.  Working out in January sucks though, I wish all these people decided to buy a treadmill instead of a gym membership…at least then they could use it as a coat rack when they quit.

Ok, so the cajun mirepoix(base veggies for soups) is always bell peppers, celery, and onion; however it was like the apocalypse or something when I went to get celery from Trader Joes because the produce section was bare.  An employee informed me that they did not get a produce truck that day so I was sh*t out of luck.  There goes my cauliflower rice and celery….if you have these things, then by all means please add them to the recipe, but I was not hauling my ass all over Virginia looking for organic celery.

Lightly grill your chicken tenders, they cook fast so someone should be baby sitting them, that is actually why I used them, because they don’t require a lot of cooking.  They don’t need to be perfectly done, they will finish up in your stew so just a few minutes on each side.  Set aside the shrimp and sausage, then chop everything else up and throw it in your dutch oven, I cut up my chipotles with kitchen shears because it will save you a sh*t ton of time.  D insisted that there was not enough liquid in the pan and that it would not cook right, not wanting to argue about the veggies releasing liquid as they cook I let him throw a second can in, this just made it more like a stew…if you like things on the soupier side add two cans…or don’t…I don’t really care.

We used hickory wood in the 22.5 inch Webbie and cooked this for about 30 minutes uncovered while the sausage got nice and smokey off to the side.  We then added in about 4TB of cajun-style seasoning: 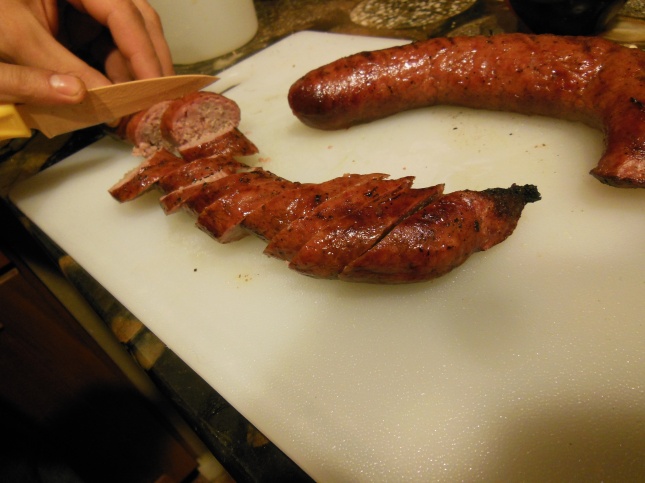 Your sausage will be done when the internal temp reaches about 160, slice it up and try not to eat it all while the rest of your food finishes cooking.  After 30 minutes on a grill toss your shrimp into the jambalaya and put the cover on the dutch oven.  Let everything cook for another 20-30 minutes or until everything looks cooked through.  Adjust the seasoning to your taste, we added in a couple extra tablespoons, and serve.

The hubbs informed me that avocado is not very cajun…you should eat it anyways though because it is delicious.